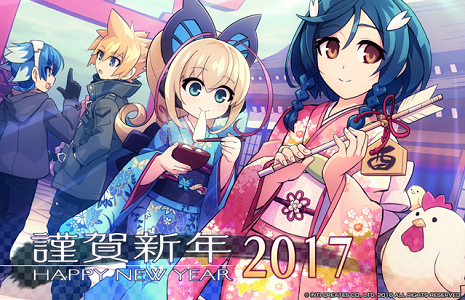 Here’s what players with a Japanese copy of the game (either stand-alone or the Azure Striker Gunvolt: Striker Pack version) can purchase and download:

Here’s a trailer and some screenshots showcasing this DLC:

But before you can enjoy this DLC, you need to download the latest update for the game (Ver. 1.2), now available from the Nintendo eShop in Japan.

Also, Inti Creates released a demo version for the game today: you can download it from the Nintendo eShop. Unfortunately, we don’t know if and/or when it will be released in Europe and North America.

Finally, here’s a New Year wallpaper for Azure Striker Gunvolt 2 (you can choose the size on the official website!):

Don’t forget that Azure Striker Gunvolt 2 will be on sale from January 1st on the Nintendo eShop in Japan!