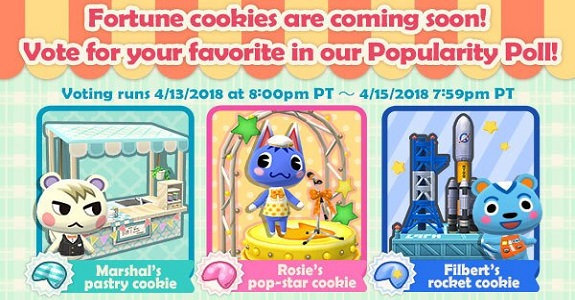 Update: the results for the Fortune Cookie Popularity Contest are in! The Fortune Cookie that received the most votes is… Marshal’s pastry cookie! It will be distributed to all players on Friday!

In order to promote this new feature, there’s going to be a special event on Twitter. Ahead of the launch of the new update, there will be a vote on Twitter. Fans will be able to pick up their favourite Fortune Cookie among the three listed below, and the one with the most votes will be given away for free to all users, once the update is available.

You can get cool pastry-shop items that are perfect for spring. It’s the perfect time to open your own café!

It looks like Marshal and Goldie are having a lovely time at the pastry shop. Be sure to try Marshal's pastry cookie at the Fortune Cookie Shop. #PocketCamp pic.twitter.com/s7dih8joSc

You can get pop-star items to reproduce a live stage performance. The campsite’s pop stars can take to the stage!

You can get space-faring items overflowing with the adventurous spirit. Change into the space outfit to feel like an astronaut!

Oh dear! Is Filbert about to blast into space? Find out what that rocket launchpad is about in the Scrapbook memory featuring Filbert and Kid Cat. #PocketCamp pic.twitter.com/t6PVAviPfc

The vote will take place this week-end, from:

You can vote on the following tweets (results from all regions will be combined):

The Popularity Poll is on! Vote for your favorite fortune cookie. Lots of info here: https://t.co/NlnyJN0kLs #PocketCamp