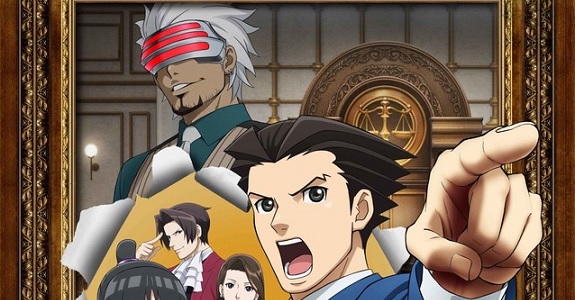 Earlier this year, we learned that the Ace Attorney anime series (officially known as Gyakuten Saiban: Sono Shinjitsu, Igiari! in Japan) was getting a second season this October. And today, it was announced that this second season will debut on October 6th in Japan, at 5.30PM JST. All subsequent episodes will air on Saturdays at that time, which is the same timeslot as the first season.

A brand new key visual was revealed: we can see Phoenix Wright and Maya Fey on it, but also Mia Fey, Miles Edgeworth, and the infamous Godot, basically confirming this second season will cover the events from the 3rd game (Phoenix Wright: Ace Attorney – Trials and Tribulations).

During the panel at the Anime Expo 2018, yesterday, it was also revealed that there would be an original story, taking place on a train.The first episode of the second season of the Ace Attorney anime will cover the events of The Lost Turnabout, the first case from Phoenix Wright: Ace Attorney: Justice (that was skipped in the first season, presumably because it would make a perfect first episode for the second season).

Next, here’s the (slightly updated) list of staff for the second season of the Ace Attorney anime:

As for the cast, we have:

No trailer yet (though one was shown at Anime Expo 2018 yesterday), or details on simulcast for fans not living in Japan, just yet.