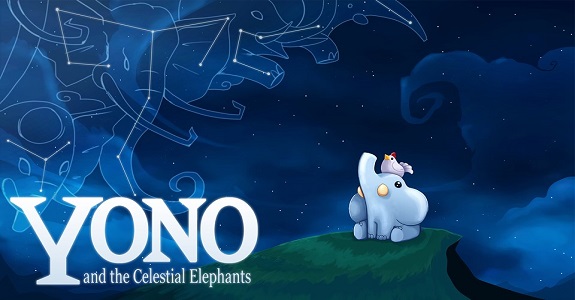 We often see animals in video game, and sometime even get to play as one. But a game featuring an elephant and a chicken as main characteres, now that’s definitely not something you get to see very often. And that’s precisely the kind of game Yono and the Celestial Elephants is!

Elephants are a mighty protectors of the world, born from the stars once per millennium. This is the age of Elephant Yono. But Yono is still so very young and in a kingdom inhabited by feudal Humans, undead Bonewights and robotic Mekani, it’s not easy to keep one’s trunk out of trouble.

Yono and the Celestial Elephants is an adventure game where you get to control an impossibly cute elephant, who is thrown into a world full of people, but also carefully designed puzzles, treasure hunts, and a little bit of combat. Its goal is to save a world he’s never seen before. During its journey, it will explore the rich history of a kingdom where humans, zombies, and robots lived side by side.

As you can see, Yono and the Celestial Elephants sure is shaping up to be a really special game!

Here’s the key features of Yono and the Celestial Elephants on Nintendo Switch:

Finally, here’s a trailer and some pictures:

Yono and the Celestial Elephants (Switch – eShop) will be released on October 12th in Europe and North America. The Upcoming Games page has been updated!