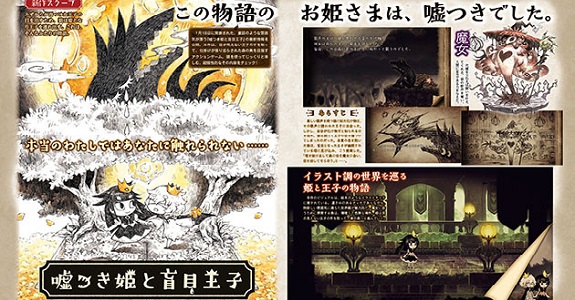 A couple of weeks ago, during a special livestream on YouTube, Nippon Ichi Software revealed a mysterious game known as Usotsuki Hime to Moumoku Ouji (lit. The Lying Princess and the Blind Prince). No platform was mentioned, but given Nippon Ichi Software’s commitment to Nintendo Switch support (backed by strong sales on that platform), it was all but guaranteed Nintendo’s hybrid console would get it.

And today, Famitsu confirmed that Usotsuki Hime to Moumoku Ouji is indeed headed to the Nintendo Switch (but also the PlayStation 4 and the PlayStation Vita). We don’t have a release date yet, but Famitsu specifies that it will be released “by July 2017”, at least in Japan.

Here’s the recording of the livestream where the game was initially revealed (the segment starts at 7:44):

The latest issue of Famitsu magazine will have an article about the game, sharing further details about it: platforms (the preview scan already gave that away), genre, release date, and more.

Usotsuki Hime to Moumoku Ouji may be using a hand-drawn art-style, but the world depicted is cold and lonely (not warm and colourful, like a picture book). It tells the story of a princess turned into a monster and a blind prince, with the former guiding the latter through the various levels.

Usotsuki Hime to Moumoku Ouji (Switch) comes out by July 2017 in Japan. No word on a western release yet, but NIS America has a press event on Thursday, and it’s quite likely the game will be announced for Europe and North America there.