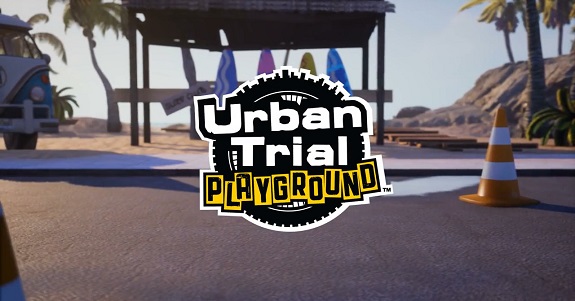 Urban Trial is a series of popular physic-based stunt bike racer games, and its fans will be delighted to learn that it’s headed to the Nintendo Switch! Earlier today, Tate Multimedia announced that the latest entry in the series, Urban Trial Playground, would launch on April 5th worldwide. Just like Urban Trial Freestyle 2 (which found great success, according to the press release), it’s developed by Teyon, not the original developers.

This new game features various environments, ranging from city streets to the sunny and colourful beaches of California. Naturally, the tricks, flips, and combos are back, but there’s also some new elements gameplay-wise.

One of them is the presence of both front and rear brake controls, which are separate. This allows you to pull off stoppies and front slips, but also slide into huge skid burns, so that you can rack up even longer combos.

Every part of every single one of the 50+ levels in Urban Trial Playground can be used to perform tricks and stunts: that’s a lot of playground for you to have fun with!

As for bikes, there’s 5 of them to choose from, and naturally, they can be fully customised. But it’s not just the looks you can change, but also the engine, breaks, and other vital parts. This is pretty important, as those elements have a direct influence on how the bike controls.

The game offers several game modes, complete with online leaderboards. One of them is called Ghost mode, and allows you to watch your best runs in order to try and beat them by perfecting different and faster routes, or performing crazier tricks.

Since Urban Trial Playground is releasing on Nintendo Switch, it’s no surprise it offers local multiplayer with couch based competitive modes (2 players in splitscreen): Time Trial and Tag modes.