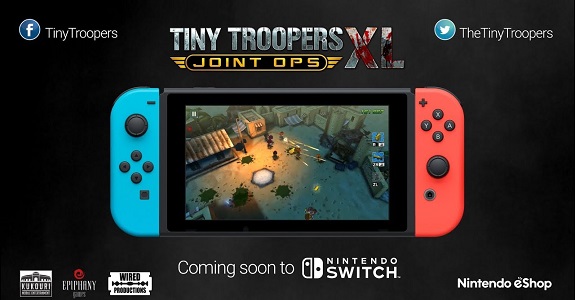 Earlier this week, Wired Productions announced they were bringing Kukouri Mobile Entertainment’s Tiny Troopers Joint Ops XL to the Nintendo Switch. It will be released before the end of the year in Europe and North America, though unfortunately, we do not have a release date (not even month) yet.

Tiny Troopers Joint Ops XL described as an “epic bite-sized arcade shooter”, filled to the brim with “action-packed mini-maps of mayhem”. In this game, you get to control your very own Tiny Troopers, and battle various evil adversaries from all around the world. You can use a “multitude” of weapons, as well as several specialist soldiers.

During each one of the 60 missions (including the Zombie Campaign DLC, included for free), you can try to collect all the medals, dog tags, and Intel. In total, the game offers over 7 hours of explosive gameplay.