The fourth Splatfest for Europe took place last week-end, and the theme was Singing vs Dancing. Team Dancing was by far the most popular, with 54% of votes… but it wasn’t the best, far from it! Indeed, the members of Team Singing may have been outnumbered, they still played significantly better than those from Team Dancing, which allowed them to win the overall contest. 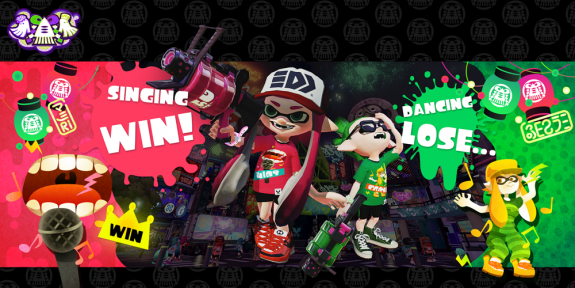 The fourth Splatfest for North America also took place last week-end, and the theme was Autobots vs Decepticons. Just like in Europe, it’s not the most popular team who won. Team Autobots was more popular, with 52% of players votes, but they still lost to Team Decepticons who won many more matches than them (56%). Just like Team Singing in Europe, Team Decepticons won the overall contest through sheer guts!

Thanks norfair for the screencaps!

Finally, here’s the latest official t-shirts for Splatoon, releasing on November in Japan (check out the source link for the pre-order dates):