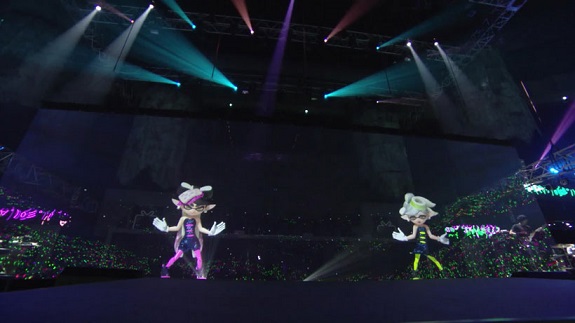 The Squid Sisters have become one of the most popular “elements” of Splatoon, especially in Japan. This year, the duo not only performed live three times (using a similar projection technology as the one used in Hatsune Miku concerts), but they also got their very own album (Splatoon LIVE in Makuhari, featuring studio and live recording of all their songs, and some extras).

If you’re interested in the previous live performances, you can find them in those posts:

Want more? The Squid Sisters had a 4th live performance last week, during the Nico Nico Cho Party 2016. Unfortunately, there was no new song this time around, though the arrangements were sligthly different. Right now, Nintendo hasn’t uploaded an official recording of the live performance, so here’s ours in the mean time!

And last week, the fourth tournament for the Splatoon Koshien 2017 was held in the Kansai region. As usual, Nintendo has shared some pictures of the event, but also the video of the final.

The next tournament will take place on November 20th, in the Shikoku region.