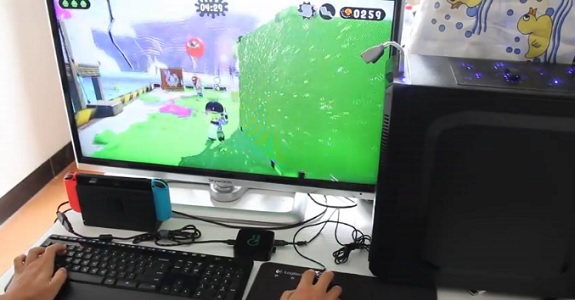 Surely you’ve heard about those endless debates about what is better: gamepads or the mouse/keyboard combo (even if you’ve been playing exclusively on consoles). Those debates generally center around specific genres, like First Person Shooters, or Third Person Shooters (such as Splatoon 2).

On Nintendo Switch, keyboards are supported, but it’s only for things like chat and not much else… you can’t use one for gameplay. But what if you could use the mouse and keyboard combo to play Splatoon 2? Well, you can, actually… using an accessory that came out before the Nintendo Switch was even released!

That accessory is called “Cross Hair converter”, and it can be used with various controllers (PlayStation 4, Xbox One, etc.). Since it’s compatible with the mouse and keyboard, that means you can use it to play Splatoon 2 with one.

Basically, you connect the mouse and keyboard to the Cross Hair converter, and then connect the thing to the console. Simple as that!… in theory, at least.

Here’s a video of Splatoon 2 played with mouse and keyboard:

So yeah, you can play Splatoon 2 with mouse and keyboard… sort of. There’s a few catches:

But the biggest catch is undoubtedly the price: the Cross Hair converter costs 21 980 Yen on Amazon.co.jp (with a 76% discount to boot!), and $145 on Amazon.com.

While you can definitely find it cheaper elsewhere, it still makes for a pretty expensive accessory (especially for a control scheme not officially supported by Nintendo, and that could get blocked via a Software update). You should definitely look for more feedback from actual users before spending your money on this!