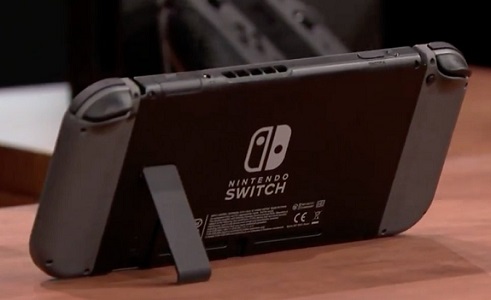 … and you probably missed it!

UPDATE: Thanks to nice and helpful Perfectly Nintendo-reader Arno, we learned that curiously, the New Nintendo 3DS LL (Japanese unit) also has the CE marking (and the FCC id) on the unit. And as we know all too well, none of the Nintendo 3DS-family systems are region free. Apparently the original Nintendo 3DS (JP model) has it too on the inside of the unit. However, the Wii U GamePad (released after the aforementioned original 3DS) does not.

The other day, when Nintendo of America’s Reggie Fils-Aimé made Tonight Show host Jimmy Fallon lose his mind by pulling out the upcoming Nintendo Switch to play The Legend of Zelda: Breath of the Wild, we inadvertently got another look at the backside of the main unit. And at the same time we saw with our own eyes a possibly big hint at the system being region free, as rumors previously suggested.

What did we see, you ask? Well, a symbol. The CE symbol, to be precise (educate yourself here: https://en.wikipedia.org/wiki/CE_marking). Now why is this thing a big deal and what does it have to do with the Switch potentially being region free? Well, take a look at your other consoles if you’re from a non-EU region.

You will notice the absence of said CE symbol on them, because they’re not intended to be sold in the European markets. However, if you look at your phone, you will probably find both the FCC and CE logo on, there since there is (generally) only one model manufactured for all markets. Or a digital photo camera. Or any other device not plagued by regional lockout specifications.

This is all speculation of course, keep that in mind. For example, if you look at previous Nintendo handhelds that were region free, like the Game Boy line or the Nintendo DS (Lite), you’ll see that those did not have the CE logo on them, and actually had distinct product codes and designations for each region. But that was also a decade ago and with systems not launching simultaneously around the globe.

So, the Nintendo Switch unit used to demo Zelda on US television featuring a certification marking solely required to be present on products meant for sale in Europe is indeed a significant hint at a region free system. But, of course, we’re still months away from release and we don’t know if this is a fully finalized unit. A grain of salt is always a wise choice for a side dish, especially with the main one being just a month away.