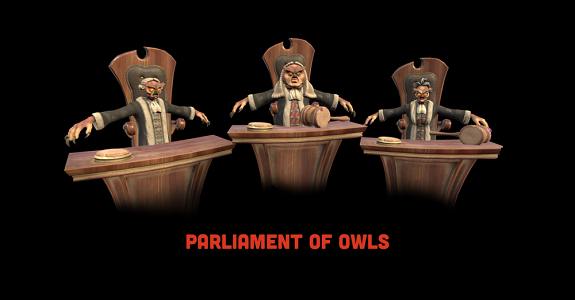 Choice Provisions began their devblog posts for Runner3 a few months ago, but so far, they haven’t shown much of the game at all. The reason for that is pretty simple: the first few months of development have been focused on laying the groundwork necessary to make the actual game. Therefore, it’s no wonder we haven’t seen much of the game!

But fortunately, development has progressed enough to allow the developers to start working more intensively on art. That’s why the team is hoping to share more and more art and assets from the game moving forward… and that’s exactly what they did on Friday, in the latest devblog post.

In Runner3, there’s an area called Spookyland, and it’s the final boss of that very area that was showcased. The boss is actually a trio of owls, known as the Parliament of Owls. Naturally, we’re not talking of nice, helpful owls that bring you letters from your runaway uncle or make you select the wrong dialogue choice on purpose.

Their court activities take place at night (they are owls after all), and it looks like they are fond of banging their gavel and… throwing their wig at you.

Here’s what the members of the Parliament of Owls look like:

Runner3 (Switch eShop) does not have a release date just yet.