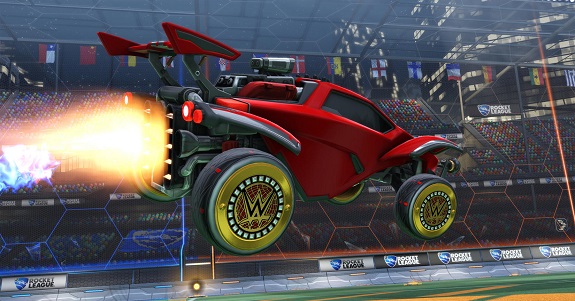 A while ago, Psyonix announced that Rocket League would soon be getting some special WWE items, as part of their on-going partnership with WWE. Those customisation items will arrive this week-end (April 8th, US time), and there will be 11 of them to begin with.

On this page, you will find all there is to know about the WWE items, including the list of codes. We will try our best to keep this page updated as new codes are shared!

Rocket League – How to get the WWE items?

The WWE items are unlocked via special codes, that randomly unlock two of them. The first code will be shared during WrestleMania 34 on Sunday (April 8th, US time), and after that, more and more special codes will be released throughout the year.

To redeem a special code, you need to do the following:

NB: each code can only be redeemed once per account, and has to be redeemed before December 31st 2018.

NB: all the items are tradeable (once you’ve acquired them).

Below, you will find general codes for the game (not related to a specific campaign like the WWE ones).