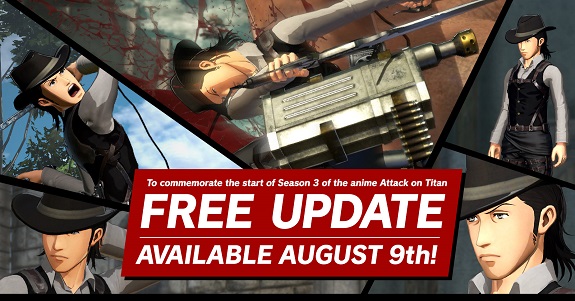 Yesterday, the first episode of the 3rd season of the Attack on Titan anime series aired in Japan. Koei-Temco took advantage of this to announce a new Software update for Attack on Titan 2, to be released on August 9th worldwide.

This new update adds various new features and new content to the game:

Kenny’s hat for your original character

The update will add the hat worn by Kenny Ackermann, one of the key characters of the 3rd season of the Attack on Titan anime series. You will be able to have your original character wear it, but if you want, why try to create an original character that looks like Kenny instead?

If you choose this difficulty level, you will be able to fully concentrate on the action: it gives you unlimited amount of gas, blades, and other consumables.

With this update, you will be able to have your original character equip the unique skills from story characters (only after they’ve reached Rank 1):

Practice modes for Showdown and Expulsion

Want to play Showdown and Expulsion, but only after practicing? You will be able to do just that, thanks to the new offline practice option for those two modes. Also, the developers have changed the completion reward for Titan Biological Research Report: instead of Titan Research Room EXP, it’s now a Generic Statement of Deployment. Finally, you will be able to carry out a Titan Biological Research Report without using any Wings of Freedom.

Here’s various other changes coming to the game:

For more details about the various Software updates for Attack on Titan 2, make sure to check out this page!

The next Software update for Attack on Titan 2 comes out on August 9th worldwide!