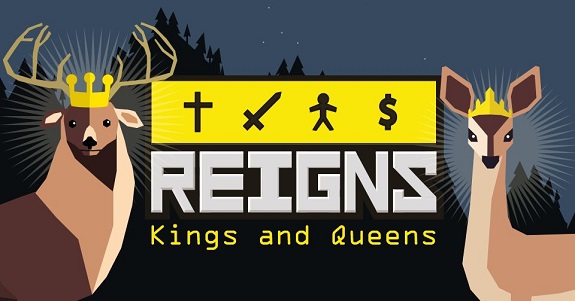 The Reigns series puts you in the royal shooes of a monarch, who has to take various decisions for their Kingdom and their dynasty. And decisions are pretty much what the whole game is all about: you have to swipe left and right to make them, and that’s it. You only have two choices to choose from, but each one is quite simply crucial, and could have grave consequences… sometimes several years “later”!

You have to survive a seemingly endless stream of requests from your advisors, peasants, allies, and even enemies, as each decision you take can seal your fate. While you only have two decisions to choose from at a given time, you still have to maintain the balance between the influential factions of your kingdom.

The game is definitely much deeper than it seems at first glance, because there’s a lot to take into account. What’s more, more often than not, you will not know you have made the wrong decision until it’s already too late to try and make up for it.

This Spring, the Reigns series is coming to the Nintendo Switch with Reigns: Kings and Queen, that include both Reigns and Reigns: Her Majesty in a single package!

Reigns: Kings & Queens (Switch – eShop) comes out this Spring in Europe and North America. The Upcoming Games page has been updated!