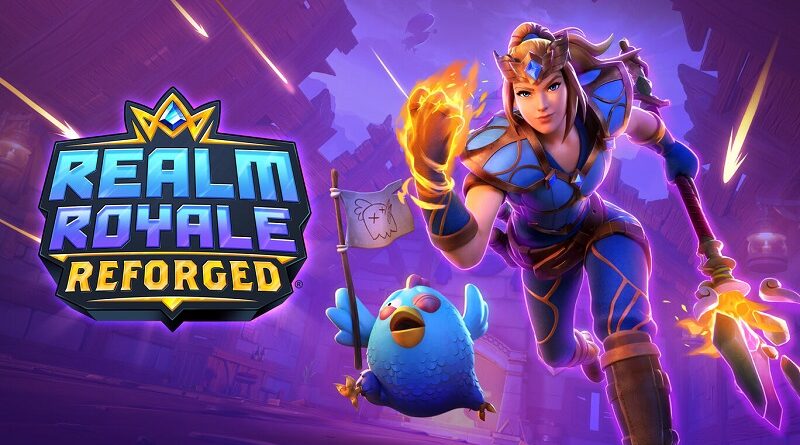 On this page, you will find all there is to know about the various Software updates for Realm Royale Reforged on Nintendo Switch (originally released on July 20th 2019 in Europe, North America, and Japan)!

No patch notes available. This update provides the following to the game:

Each Class now has a progress track based on experience gained while playing matches with them. Along the way you’ll earn prizes, with the very end being a mastery skin, to show off how awesome you are. We also made it so that all your previous progress with these classes was transferred over to the new track, and once you play through a match with each of them, you’ll be given the prizes you would have earned had you started from Level 0.

Wolfy of the Realm Bundle

The Runes system has been removed and replaced with Armor. There are four different pieces of Armor that can be looted, equipped, and upgraded throughout the course of a game, each granting a different buff/bonus.

Class locking is back!

Mages are flinging fireballs, and Warriors are getting Enraged! Class weapons and abilities are now locked behind Classes but….You now have more flexibility in how you play your class!

These never change, and you can not drop these from your inventory. Only upgrading or finding better rarities will increase the power of these abilities.

These are the Combat Abilities you know and love… plus a few new ones! The twist is that you can now use Combat Abilities in either slot! Want to use Charge and Enrage? GO AHEAD! Dodge Roll and Proximity Trap? Get at it!

The equip process has gone through a revision (for players that played Realm Royale in its earlier stages, you will instantly recognize this system), for current players, you might find your muscle memory getting in the way but hopefully, you find the transition smooth enough.

When your ability slots are full and you want to change to a new ability on the ground, you must first “stage” the ability and then hit the corresponding ability button for the slot itself.

Class Weapons can only be wielded by their respective Class. Starting out, each Class will have two Weapons in Realm Royale Reforged. We plan to build out and add more Class Weapons in the future so stay tuned!

The Warrior currently wields the Long Sword and Throwing Axe, and while the Long Sword is a ton of fun, we recognize that it’s not really competitively viable in its current state. We have some fun Warrior weapons ideas in the works, so keep an eye out.

Universal Abilities and Weapons are still in Realm Royale Reforged. Anyone can use these, and these Abilities fall under “Combat Abilities.”

Class Chests are a new type of Chest found throughout the Realm that can be looted for Class specific Weapons and Abilities, as well as Armor. In terms of Loot rarity found in these Chests, most of the time they’ll drop Rare loot, but there’s a small chance to find Epic gear in these Chests.

These Chests are available to loot as soon as you drop into Realm Royale Reforged, allowing players to immediately start leaning into what’s unique to their Class and gameplay style.

We’ve made some changes to how Circle Zones work to help bring back the feeling of “Battle” that comes with the Battle Royale genre.

There will now be a Circle Zone designated as soon as you load into a game of Realm Royale Reforged. Having a smaller portion of the map to play with from the beginning will result in less downtime at the beginning of a match and will bring on those fun and tense moments that players love more quickly.

Initially, our only Normal Matchmaking Queues will be Solos and Trios, and Duos and Squads will be unavailable at launch.

While we understand the frustration in losing what could be your favorite game mode (Squads or Duos), we believe this direction is healthiest for the game and it comes with these added benefits for players:

This Bundle will be granted to everyone with an existing Realm Royale account that has played prior to the Realm Royale Reforged Update.

This Bundle will be granted to players that log in during Realm Royale Reforged first Update. Keep an eye on our social media channels for details on when these bundles will be sent out!

How to download updates for Realm Royale Reforged for the Nintendo Switch?

To download the updates for Realm Royale Reforged, you have three options: