Today, a promotional event for Pokkén Tournament was announced. If you play the game before July 31st, using a BANA Passport, you can unlock two special assist Pokémon: Whimsicott (it can use Substitute) and Jirachi (it can use Wish in order to increase your Burst Gauge).

But that’s not all: the BANA Passport can also be used to register on a special web portal, which is accessible from a PC, a smartphone or a tablet (click here!). Players can use it in order to take advantage of various features. If you pay 300 Yen a month, you acn get access to some additional features.

Here’s a handy chart showing the difference between the free and premium service for the web portal (courtesy of Serebii): 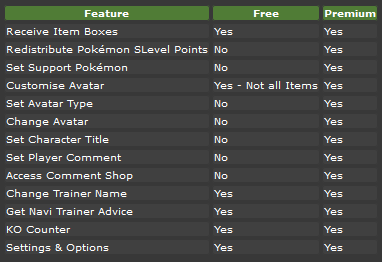 Here’s screencaps from the web app, but also the official website:

During the livestream today, several stages were revealed:

– Neos City: a rather large city, with a Pokémon Center (complete with Joy, Chansey and Blissey outside);
– Haunted House (seen in the Gengar reveal trailer)
– Ruins, with statues of Regirock, Regice, Registeel and Regigigas

Here’s a Stages Showcase video, recorded from the stream:

Head after the break for two more videos!

Next, we have a recording of the Pokémon Series Retrospective, which was originally shown at the Pokémon Games Show, in 2013. It was at the very end of that video that Pokkén Tournament was teased.

The official trailer for Blaziken was also shown during the livestream:

Finally, the official Twitter account is running a special campaign, where fans can suggest Pokémon to be added as Support Pokémon. You have until July 23rd to make a suggestion, adding @pokken_official and #ポッ拳 in your message.

Pokkén Tournament (Arcade) was launched today in Japan. Blaziken will be added to the game next month.