It has been announced that Pokémon Detective Pikachu is getting a home release this Summer in the United States. Here’s the release dates:

No word on releases in other countries yet, but no doubt more announcements will be made in the next few weeks/months.

The latest Community Day for Pokémon GO in Europe, the Middle-East, and Africa was plagued by a rather unfortunate issue, causing Slakoth (the focus Pokémon) to stop spawning. As compensation, a special event was announced exclusively for those regions.

Here’s all you need to know:

Nintendo have announced that Pokémon Sword and Shield will be playable at the Japan Expo 2019, which is to be held from July 4th to July 7th in Paris. It will be the same demo that was playable at E3 2019 and various other events.

Back when Pokémon Masters was announced, The Pokémon Company specified that more details will be shared in June. Many people thought this meant E3, but it wasn’t the case after all. And yesterday, it was announced that a video presentation will premiere on June 27th. So far, it has only been announced for Japan, so it’s not clear if Europe and North America will also get one at the same time, or if it will come at a later date.

Here’s the embeds of the presentation:

The presentation will premier on June 27th at:

Pokémon Masters (Android, iOS) does not have a release date yet.

Today, a new Team Match event for Pokémon Duel was announced. Here’s all you need to know: 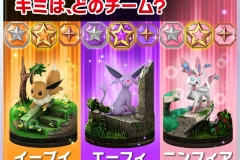