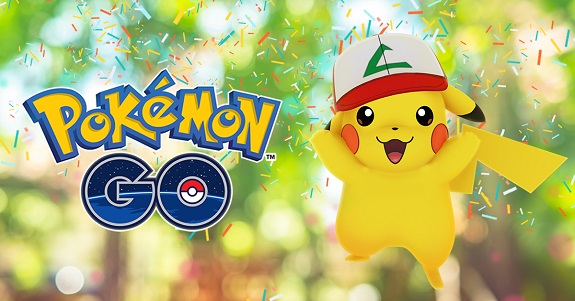 One year ago, Pokémon GO was first launched in Australia and the United States. Since launch, over 125 billion Pokémon have been caught, which is a really impressive number. To celebrate this first Anniversary, Niantic is hosting yet another event from July 6th to July 24th (1PM PDT / 4PM EDT / 9PM BST / 10PM CEST / July 25th 5AM JST).

During that period, a special Pikachu wearing Ash’s cap (from the anime series) will appear all around the world. There’s also a special, limited-time Anniversary Box (including Incubators, Max Revives, Ultra Balls, and Raid Passes) available at a discount from the in-game shop.

Speaking of Pokémon GO, The Verge published an interview with John Hanke (CEO of Niantic), who explains that the team is currently 6 months their initial roadmap regarding new features and content. All of this is due to the rush from launch, when the development team had to focus exclusively on making the game run smoothly for everyone:

We lost probably six months on our schedule because of the success of the game. Really all the way through November and December, from launch onward we were rebuilding and rewiring infrastructure just to keep the game running at the scale that we were running at. We were fortunate to have a massive launch, a massive success, and many, many more users than we had planned for. But we had to redirect a substantial portion of the engineering team to [work on] infrastructure versus new features. That switched off things like extending gyms, it pushed out things we still want to have, like player-versus-player and trading. I’d say we’re about six months behind where we thought we would be.

Today, two more Pokémon distributions for Pokémon Sun and Moon were announced in Japan. Both are tie-ins with the latest Pokémon movie, and take place in 7-Eleven stores across Japan (via their wifi hotspots):

Those distributions are part of the Pokémon Rally 2017, where fans can get various Pokémon-related goodies.*

Naturally, the list of Pokémon distributions for Pokémon Sun and Moon has been updated with those new Pokémon!

The second one instead focuses on the new elements from this “DX” version of Pokkén Tournament, such as the new Battle Pokémon:

Today, yet another update for Magikarp Jump was released. It brings the game to Ver. 1.2.2, but only consists of more bug fixes and nothing really substantial.

Speaking of Magikarp Jump, it was announced today that the game has now been downloaded over 10 million times worldwide. A pretty satisfying performance for such an unassuming game featuring the most pathetic of all Pokémon!

Here’s the preview for the next episode of the Pokémon anime series, airing on July 20th in Japan (next week, last year’s movie airs instead!):

Interested in the Lillie and Cosmog (by Kotobukiya) and Lillie Nendoroid (by Good Smile Company)? Well, both are now available for pre-order on the Pokémon Center Online website (US-only)!

Here’s the latest promotional video for the Pokémon Center stores in Japan:

Here’s the latest two videos for the Pokémon Ga-Olé game on Arcade: