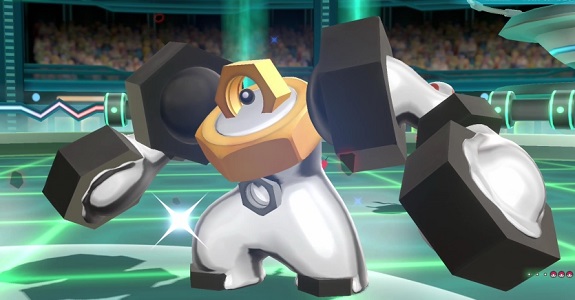 A few weeks ago, The Pokémon Company revealed a brand new Pokémon set to appear in Pokémon: Let’s Go, Pikachu! / Let’s Go, Eevee! and Pokémon GO: Meltan. It’s a really surprising Pokémon, and in more ways than one! Today, it was revealed that Meltan can actually evolve… a first for a mythical Pokémon! The evolution is called Melmeltal, a Pokémon that had not been seen in 3000 years. It used to be worshipped in ancient times, due to its powers to create metal.

Here’s some stats about Melmetal:

Melmetal is significantly stronger than Meltan, with Evolution causing its body to harden and become incredibly sturdy. Believe it or not, it’s body is mostly made of liquid metal, and its arms are quite flexible: they can actually whip forward, and deliver devastating punches.

Melmetal can use a unique Steel-type (physical) move known as Double Iron Bash. It uses the hex nut in its chests like an axle in order to spin its arms at high speed, and hit the opponent twice. This is quite the powerful move that may make the target flinch, only made possible by the weight of the heavy hex nut on its arms combined with the spinning motion.

Now, you’re probably wondering how to have Meltan evolve into Melmetal. Unfortunately, if you do not (or cannot) play Pokémon GO, you’re out of luck. The only way to get Melmetal will be to give Meltan 400 Meltan Candies in Pokémon GO. To get those candies, you will have to do things such as catching Meltan, sending it to Professor Willow, or have it travel with you as Buddy Pokémon.

You will also be able to get Meltan Candies by sending Meltan from Pokémon GO to Pokémon: Let’s Go, Pikachu! / Let’s Go, Eevee!. The Pokémon Company also mentions “handy shortcuts” to speed up the Evolution process: getting more Meltan Candies by trading with friends or using Rare Candies.

Naturally, you can bring your evolved Melmetal in Pokémon: Let’s Go, Pikachu! / Let’s Go, Eevee!, but you can also have friends send it to you from their Pokémon GO accounts.