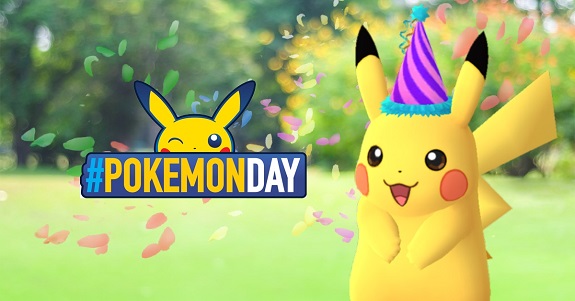 In order to celebrate Pokémon Day (February 27th) and the 22nd Anniversary of the Pokémon series, a special Pikachu wearing a party hat is now appearing in-game. It’s the same one that appeared last year, but with one major difference: it knows Present, a move it normally doesn’t have. Also, when you catch one, you get x3 the usual amount of Stardust. You have until February 28th 1PM PT / 4PM ET / 9PM GMT / 10PM CET to get it.

But that’s not all: two special outfits are now available for purchase in the in-game store, using Coins. They’re based on Red and Leaf from Pokémon FireRed and LeafGreen.

Today, the third Community Day was announced. It will take place on March 25th, and will allow players to catch a special Bulbasaur. However, it’s not clear what’s so special about this Bulbasaur yet: this will be announced at a later date! During this Community Day, you will get 3 time the usual amount of XP when catching Pokémon, and Lure Modules will last 3h.

Here’s when this second Community Day for Pokémon GO will take place: