Bloomberg have shared another report about the rumoured new Nintendo Switch model, supposedly releasing later this year (in time for the holiday season). Along with the OLED screen, this new model would also sport an upgraded Nvidia chip, offering better graphics and processing capabilities with a better CPU and increased memory.

An interesting aspect of that new ship is that it would support DLSS (Deep Learning Super Sampling), a technology which makes use of deep learning to upscale lower-resolution images to a higher-resolution for display on higher-resolution screens. This would allow Nintendo Switch games to be displayed in 4K when used in docked mode (with a 4K TV, obviously).

However, as exciting as it sounds on paper, that technology has a major drawback: developers need to add support for it to their games manually. In other words, DLSS would primarily be used in new games, though one can assume that developers would also be able to release updates for their already released games.

Naturally, both Nintendo and Nvidia refused to comment on those rumours. Considering we’re still months before a proper announcement (this new model would launch during the second half of the year, after all), it will be a long while before we find out whether there’s really a new Nintendo Switch model with an OLED screen and support for DLSS in the works.

Nintendo and Niantic have already collaborated in the past with Pokémon GO, but the partnership between the two companies is about to move one step further. Nintendo have announced that they are working on not just one, but a “series of apps” with Niantic. The first one will feature the Pikmin, and has been designed to make walking more fun.

Absolutely nothing about the game has been revealed, and all we know at the moment is that it will have gameplay activities designed to encourage walking and make the activity more enjoyable. It will make us of Niantic’s AR technology, like the other games the two companies are working on.

This Pikmin mobile game will launch worldwide in the second half of 2021, with Niantic as publisher. Development is in the hands of Niantic Tokyo Studio, founded back in April 2018 (this will be their very first game). You can pre-register for it on this page! 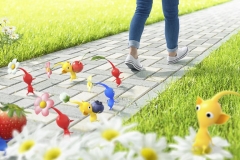