Today is April 27th, and it just so happens to be the 27th Anniversary of everyone’s favourite pink puff ball… Kirby! To celebrate, HAL Laboratory made a special illustration… and Qbby even chimed in and brought a cake! 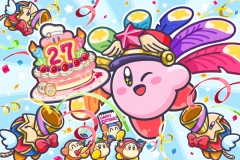 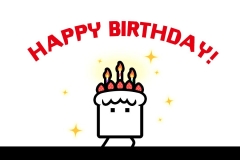 Also, the photo frame service on the official Kirby website was updated with 3 new frames! Click here to check it out for yourself: 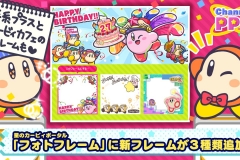 Of course, there’s celebrations at the Kirby Café in Japan, with a Kirby 27th Anniversary Fair, and special Kirby Birthday Chocolate available for purchase at the store: 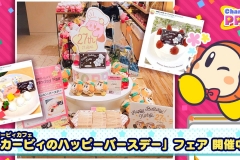 Finally, here’s a video retrospective of the Kirby series, entirely made in Kirby Star Allies:

The latest translated interview from shmuplations is about the original Super Smash Bros., with the one and only Masahiro Sakurai. Click here to check it out!

—Did you run into any problems with getting permission for the characters?

Sakurai: The first person I asked for permission was Shigesato Itoi. Next was Shigeru Miyamoto. When he saw our work he said, “Hey, you’ve got Mario down pretty good!” The Pokemon characters took the longest to get permission, because thir image is tightly supervised. I broached the subject with Pokemon Company president Tsunekazu Ishihara, but the impression I got from him was that it would probably be difficult. Satoshi Tajiri was more encouraging—he was like, “this looks cool!”

Personally, as the creator of Kirby, I understood how they felt: I would feel be really upset if Kirby was featured in a game that people ended up disliking, or if the people got his image and movements wrong. In fact, there had been times when I’d been kind of annoyed by the way Kirby was depicted in someone else’s illustration or as a game cameo. Smash Bros. was conceived, in part, as a reaction against that kind of sloppy handling. I imagine anyone who creates a character feels similarly protective, but Smash Bros. brought an unprecedented number of different characters together and it was of the utmost importance to us that we re-create their personalities and characteristics faithfully. I absolutely did not want to betray the original characters’ creators.

Nintendo have announced that Marvel Ultimate Alliance 3: The Black Order will be released on July 19th in Japan, which is the same day Europe and North America are getting it, and that it will cost 6 980 Yen + taxes in that region. It’s not clear why Nintendo waited that long to announce the Japanese release date.

Here’s a commercial for the game:

Marvel Ultimate Alliance 3: The Black Order (Switch) comes out on July 19th worldwide. The Upcoming Games page has been updated!

Interested in a Splatoon 2-themed reversia board? Maruoka, a Japanese toymaker, got you covered! Here’s some pictures of the board, now available in toy stores across Japan: 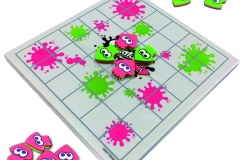 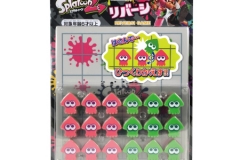