Here’s the latest episode of Nintendo Minute, which is about BoxBoy! + BoxGirl! this time:

Hi, today we’re playing some new stages in BOXBOY! + BOXGIRL! in co-op mode and wow…it’s quite the challenge. There’s a demo for the game out now on the Nintendo Switch eShop so give it a try hopefully with a really good partner unlike what’s happened here. As always, thanks so much for watching and we’ll see you next week!

Nintendo have announced that, just like in the main game, there will be hidden Cat Mario in the VR content of Super Mario Odyssey. Will you try to find them all? 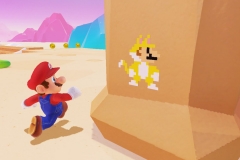 The Software update adding support for Toy-Con VR Goggle to Super Mario Odyssey will be released on April 25th/26th!

Here’s a promo video for the Super Smash Bros. Ultimate European Smash Ball Team Cup 2019 Final, which will be held on May 4th and May 5th in Amsterdam: