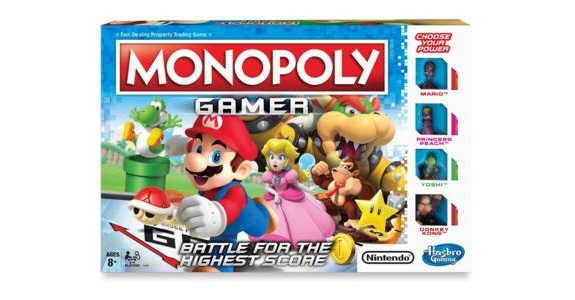 Monopoly is most definitely one of the most famous board games of all times, and there’s been tons of special editions over the years. There’s already been a few featuring Nintendo characters, including The Legend of Zelda. And the latest one, Monopoly Gamer, features characters from the Super Mario series (despite the extremely generic name!).

Instead of the standard Monopoly tokens, you have Super Mario characters, who happen to have their own special powers within gameplay. Characters include Mario, Princess Peach, Yoshi, and Donkey Kong… but also Bowser, that you need to defeat at the end. There’s also some boss battles, it seems!

Naturally, some elements stay the same: there’s Properties to buy, and there’s lots of money (Coins) to collect. As you can imagine, it’s the player with the highest score at the end who wins the game.

But that’s not all: there’s also some Figure Packs, that include several additional figures (with their own unique powers):

Here’s some pictures for the Monopoly Gamer and the Power Packs:

The Monopoly Gamer costs $24.99 and the Power Packs cost $3.99 each. They will be released this Fall in the United States, but they’re already available at the Nintendo NY Store!