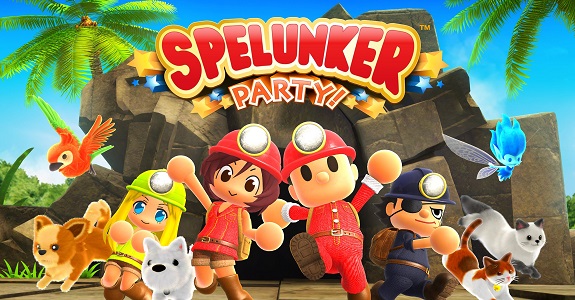 Since launch, Square-Enix has been one of the strongest supporters of the Nintendo Switch, with many games either announced or already released. One of them is called Minna de Waiwai! Spelunker, and it was released in Japan back in April. If you were hoping for a western release, you’re in luck: Square-Enix just announced that it would be released next month in Europe and North America, as Spelunker Party!.

Based on Spelunker Z, Spelunker Party! is a platform/action game playable with with up to 4 players in co-op, either locally (with splitscreen available) or online.Together (or on your own!), you can go explore various caves in search of treasures. The thing is, said caves are filled with enemies and obstacles, so getting out of them alive with the precious loot is not going to be a walk in the park… or cave, in that case.

The game is said to feature over 100 stages, with plenty of hidden Litho-stones to discover: those can be used to unlock new items, equipment, and even pets!

Spelunker Party! (Switch) is releasing on October 19th in Europe and North America, exclusively via the Nintendo eShop (no retail release), and will cost $29.99 / 29.99. The demo version will be released on October 7th. The Upcoming Games page has been updated!

One thought on “Minna de Waiwai! Spelunker headed west as Spelunker Party!, out next month”