The latest set of DLC for Minecraft Dungeons, Echoing Void, comes out on July 28th worldwide. It will allow players to explore the End Wilds, and discover the conclusion of the current storyline (The Orb of Domicance).

Mojang Studios already showcased it in a video a few days ago, but If you want to see more of the Echoing Void DLC in action, then make sure to check out the video below. It showcases the dreaded End Wilds and the Silverfish mob!

There’s also one showcasing more of the Echoing Void DLC, but also the Gauntlet of Gales (from the free Software update):

Also, Mojang Studios have shared an article about the DLC. Matt Dunhorn (lead Game Designer) at Double Eleven came to share some juicy details about the DLC and its development. Click here to check it out!

Bringing the End over to Minecraft Dungeons has been on the table since the very beginning! We knew we wanted to recreate it in Minecraft Dungeons, but when we sat down to plan it out, we quickly identified a few needs. One amazing thing with vanilla Minecraft is the ability to explore endless amounts of terrain, and in a realm like the End it can be a huge thrill.

In Minecraft Dungeons however, we need a world that is hand-crafted and densely packed with mobs, so together with Mojang Studios, we did a bit of a “refresh” in the same vein as Flames of the Nether – something that would be instantly familiar to anyone who had ever ventured through an End Portal, but with more materials, plant life, structures, and opponents 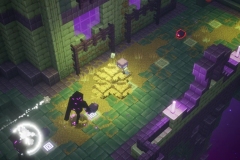 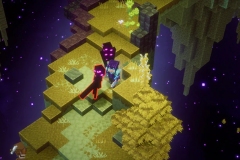 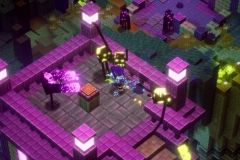 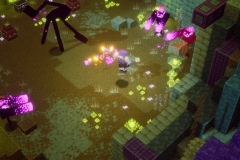 Finally, Mojang Studios have shared a FAQ containing various details about the DLC, its contents, and more. Click here to check it out!