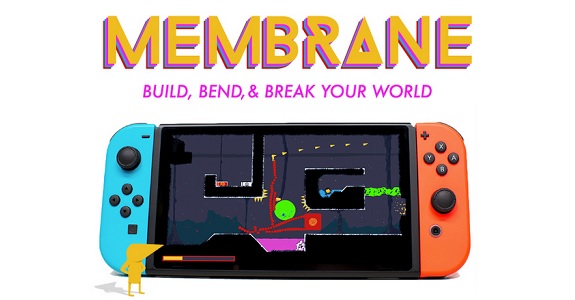 Are you a fan of physics-based puzzle games? If yes, then Membrane is definitely worth checking out.

Are you a fan of physics-based puzzle games with a focus on creativity? Then yes, Membrane is definitely a game for you.

Are you a fan of physics-based puzzles games with a focus on creativity, and a rather psychedelic art style that makes you go “What the hell is this? I really don’t know, but it’s fun!”? If yes, then Membrane should be at the top of your most anticipated games on Nintendo Switch!

Last week, Perfect Hat announced that their debut game would be released exclusively on Nintendo Switch, this Winter. It’s best described as a “crative-action puzzle game”, where you get to build, bend, and break the world around you in order to interact with that very world, and solve puzzles. That world is more or less a “curated sandox”, which is meant to look like a day-glo coloured human body interior.

But the really interesting part about the game is that it’s been designed to encourage creativity, allowing players to build their own, unique solutions to the puzzles. According to the developer, those were “not designed to be extremely difficult or deceptive, but built and designed to reward creativity and experimentation from the player.”.

Here’s the debut trailer for the game and some screenshots:

Membrane (Switch) will be released this Winter in Europe and North America. It’s already been added to the Upcoming Games page!