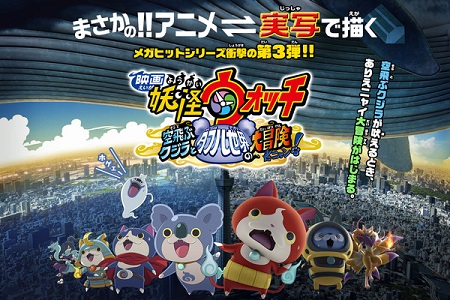 Last week, during the special event celebrating the upcoming opening of the third Yo-kai Watch movie (Yo-kai Watch: Sora Tobu Kujira to Sekai no Dai Bouken da Nyan), the production team confirmed that a 4th Yo-kai Watch movie would open in Winter 2017 in Japan. More details about that movie, including its title, will be announced at a later date.

Taking a look at previous movie, it’s pretty safe to assume that the 4th one will also open in December, most likely on December 16th. The real question is which game will be released alongside the movie!

Today, Capcom uploaded another gameplay video for Megami Meguri, with the voice actresses for Tsukumo and Amaterasu playing the game:

And here’s pictures of acryllic stands releasing on the same day as the game:

Today, Flyhigh Works announced they were bringing the Nintendo 3DS version Severed to Japan, with the help of Circle Ent. Unfortunately, we don’t have a release date yet, but the game has been added to the Upcoming Releases page!