Launched in December 2014 in Japan, and last month in Europe and North America, Nintendo Badge Arcade allows you to play at various crane game machines. Your goal is to get stickers, to use on the Home Menu of your Nintendo 3DS and decorate it. You have to pay in order to play, but Nintendo frequently gives free plays (and you can get some by playing on the training machine, once a day).

In other words, by buying this card, you basically get 1 090 Yen (5 plays cost 90 Yen in the Japanese version of Nintendo Badge Arcade). It’s available at the various Lawson stores across Japan. 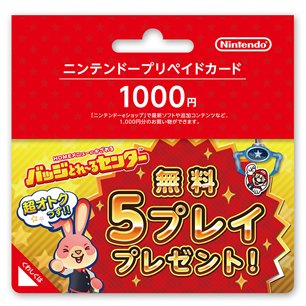