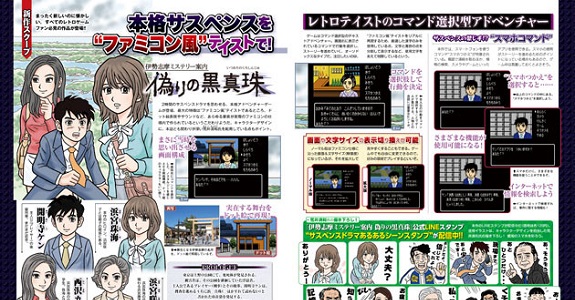 Ise Shima Mystery Annai: Itsuwari no Kuro Shinju is described as a “Famicom inspired” authentic suspense adventure game, and it features chara-design by one Kiyokazu Arai (who previously worked on Itagaki Street, but also with Famitsu magazine). As you can see for yourself in the preview scan below, the game features old-school pixel graphics, just like an actual NES adventure game.

The game seems to be centered around the protagonist’s smartphone, which has its own command. You can use various apps on it, such as phone (well, yes, that’s a phone!), search, camera, and even games.

And here’s the debut trailer along with a couple of screenshots:

By the way, Famitsu confirms that this game does not support stereoscopic 3D, and is entirely displayed in 2D only.

Ise Shima Mystery Annai: Itsuwari no Kuro Shinju (3DS – eShop) will be released before the end of the year. It’s already been added to the Upcoming Games page!