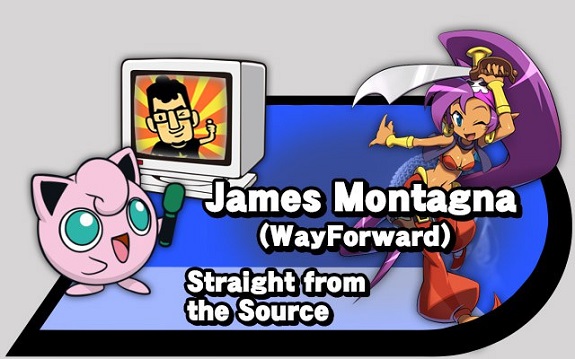 The timing couldn’t be any better (what with him announcing a new game for Wii U last week): Source Gaming recently had the opportunity to chat with James Montagna (from WayForward), developer of Dot Arcade Game and Dodge Club Party (both on Wii U). Here’s the main topics tackled in this audio interview:

0:30 – Discuss indie games development, WayForward and the localization of Shantae
49:15 – Start of the Smash Discussion (including the Smash ballot, and Masahiro Sakurai himself)
1:22:40 – Start of the Lightning Round, new game announcement.

Good news for fans of hardcore platformers: Mutant Mudds Super Challenge has been submitted to both Nintendo of Europe and Nintendo of America for lotcheck (the first time ever for Renegade Kid, thanks to the IARC). We should have a release date within the next few weeks!

There’s also a deadline for the RT: Sunday, February 14th at:

Dreii is a unique puzzle game coming this year to the Nintendo eShop of the Wii U. As shown in the trailer below, the game can be played in co-op. What’s more, the game has crossplay with the PS Vita version of the game (which comes out next week), allowing Wii U and PS Vita owner to play together online.

Here’s the trailer for Dreii:

Anima: Gates of Memory is a third-person RPG that went through Kickstarter, and is supposed to come out on Wii U. Unfortunately, the developers didn’t have good news for the Wii U version in their latest Kickstarter update. Here’s what they said about it:

Anima Gate of Memories will be released simultaneously in Windows, Xbox One and PS4 and we are working to be able to release a few months later a WiiU version (which, even if we are still not sure, we hope that will be possible). Right now we are trying to discover if we can provide a console key. Give us a few more weeks to see if it can be done.

It sounds like a funny joke, but it certain isn’t: FreezeMe has a rather odd glitch that makes it freeze and crash under certain conditions. Good news: the developers are not only aware of it, but they’re already working on a patch which is coming out soon!