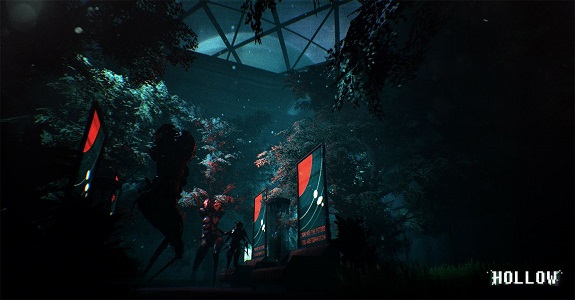 Last week, Forever Entertainment announced quite a few games for the Nintendo Switch, including Violett and Prodigy. But there’s still a few more we haven’t talked about, such as Frederic: Ressurection of Music and Hollow!

If you were looking for something more action-oriented and dark on Nintendo Switch, Hollow may well be a game worth checking out. It takes place on Shakhter-One, the first space mining ship to gather resources from the atmosphere of Jupiter. Thanks to this ship, humanity can survive on Earth, where resources have become incredibly scarce.

Shakhter-One is also described as utopia, where there is no unemployment, and every child gets an equal start.

In Hollow, you get to play as one of the pilots transporting resources from the ship back to Earth. But one day, you wake up in an emergency capsule, driting near the facility. The problem is, you absolutely do not remember remember who you are, how you got there, or what happened before you lost consciousness. All you can remember is the autopilot docking code for your emergency capsule.

Once you make it to Shakhter-One, you realise that something has gone horribly wrong: not only the entire crew has gone missing, but power outages have messed up the place. It looks like the ship hides some pretty terrifying secrets, and uncovering them all may well cost your sanity… if not your life.

Finally, here’s a trailer and some screenshots (not from the Nintendo Switch version):

Hollow (Switch – eShop) does not have a release date yet, but it will not be before Q4 2017 (when the game is set to release on PC). The Upcoming Games page has been updated!