And recently, the official website for the concerts was updated with some additional guests (as well as the date of the concert they will attend):

Finally, here’s the Fire Emblem if-themed nanaco card players will be able to get if they order both the game (any version will do) and one of the Fire Emblem 0 Starter Packs at Itoyokado: 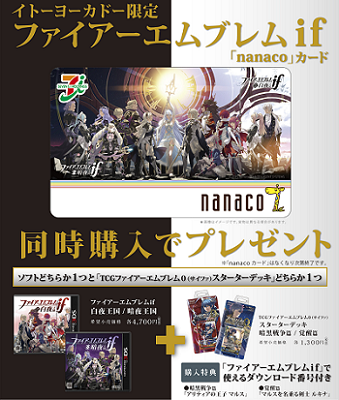 The Fire Emblem 25th Anniversary concert will take place on July 24/25th in Japan.
Fire Emblem if (3DS) comes out on June 25th in Japan, and in 2016 in Europe and North America.
Fire Emblem 0 (TCG) will be launched on the same day in Japan.