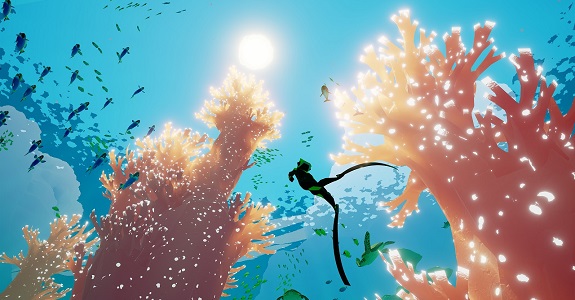 The latest game from 505 Games for the Nintendo Switch is none other than the critically acclaimed ABZÛ. If you were a fan of Endless Ocean on Wii, then this is definitely a game for you… provided you like your diving experience full of colour and mysterious creatures!

ABZÛ will be released on Nintendo Switch on November 29th, and is now available for pre-purchase on the Nintendo eShop (with a 10% off discount).

ABZÛ is a beautiful underwater journey that immerses players in a vibrant ocean world full of mystery and bursting with colour and life. Playing as the Diver, you’ll discover hundreds of unique species based on real creatures and form a powerful connection with the abundant sea life. But this underwater world can be dangerous, broken and toxic – and your mission is to unlock the mysteries of the deep and change the world around you for the better.

Developed by Giant Squid Studios – led by Matt Nava, the artistic mind behind Journey® and Flower® – and featuring a score by Grammy-nominated and two-time BAFTA-winning composer Austin Wintory, ABZÛ is told in the form of mythology and folklore, while capturing the dream-like feeling of underwater exploration. The name is derived from ancient Sumerian language; AB, meaning water, and ZÛ, meaning to know: ABZÛ is the ocean of wisdom.

ABZÛ (Switch – eShop) comes out on November 29th in Europe and North America. The Upcoming Games page has been updated!

Yesterday, PQube announced that Nippon Marathon will be released on December 17th in Europe and North America. The game will feature a song by Diana Garnet, who sung one of the ending songs for the Naruto Shippuuden anime series.

What could be more chaotic than having to run through a busy Japanese train station during rush hour with hundreds of salarymen and barriers? How about just missing the departing bullet train so you have to run on top of it and jump on a bull train mid race! Add some watermelons, classic banana peels and hurdles to that and – voila – we have ourselves a brand new Nippon Marathon track!

And some details about the story mode:

Story Mode allows you to choose and follow the journey of the four main characters from pre-Nippon Marathon to post-Nippon Marathon in a mix of races and visual novel with numerous chapters – one of them is Snuguru Maestro! Find out about his ancestry, where his love for watermelons comes from and most importantly: how in the world is he half-human, half-dog?!

On Dec 31st 2013 I created the first concept art for YIIK. Here it is! You'll notice the colors are a bit more muted, and everyone was a bit lower poly… but general style mostly stayed! #gamedev pic.twitter.com/0A24Nfgipq