Modus Games have shared some footage for Skully:

Today’s video showcases the headstrong protagonist’s ability to nimbly cross lush stretches of a sprawling island paradise, hopping across stepping-stone pathways with ease and twisting through perilous caverns pooling with scorching lava. Aided by powerful new forms sculpted from the isle’s pools of magical clay and an endearingly graceless ally named Terry, Skully always finds a way to clear (or crash through) obstacles, be they perplexing puzzles or impassable piles of stone.

Skully follows the peculiar journey of a skull brought back to life by an enigmatic deity desperate to save an island from the devastation it faces if Terry doesn’t mend fences with his feuding siblings. Players will leverage clay-boosted powers as they tumble through the island’s seven distinct ecosystems, conquering tricky platforming, encountering colorful locals, and outwitting environmental puzzles to discover the mystery at the heart of the land’s bubbling quarrel.

Heads up for players interested in The Almost Gone: a demo version is now available for download from the Nintendo eShop, in Europe and North America!

The Almost Gone (Switch – eShop) comes out on June 25th in Europe and North America.

Natsume have announced their second indie game: Legends of Ethernal, developed by Lucid Dreams Studio. It will be released this Fall on Nintendo Switch, in Europe and the Americas.

Here’s some details and a couple of screenshots:

Legends of Ethernal is a 2D single-player action adventure game where you need to explore beautiful hand-crafted environments, solve clever puzzles, and battle challenging creatures to uncover the truth about your parents’ disappearance. Armed with courage and driven by the pain of loss, our unlikely hero sets out on a journey to uncover the truth behind his family’s disappearance… But what he discovers will forever change the World of Arkanys. 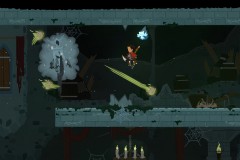 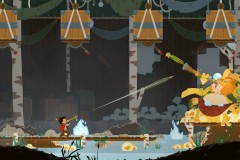 Legends of Ethernal (Switch – eShop) comes out this Fall in Europe and North America.

Here’s a trailer and some details about the game, which does have a really interesting history:

ININ Games is excited to announce that we are able to give fans of retro platformer games the opportunity to play Ultracore after more than two decades of waiting for this piece of gaming history! Packed with ultimate action in 5 large stages with various weapons to collect and use to fight your enemies, the thrilling run & gun platformer from the 90s will be available digitally on June 23rd 2020 for PS4 and Nintendo Switch.

With the endeavour of Strictly Limited Games, Ultracore has been restored and completed after its development was put on hold due to an upcoming evolution of video game consoles back in 1994. In collaboration with experts of the genre and (former) members of DICE, the game was brought to life – improved, optimized, full of run & gun action and hardcore boss fights.

This masterpiece has been further refined by adding a second full-length soundtrack, so players will be given the option to either play through the game with the old or the new background music. This new soundtrack features more than 20 full-length synthwave and electronic tracks of few of the genres best artists such as Scandroid, Waveshaper, Mega Drive, Fury Weekend, 3Force, Isidor, Fixions and many others.

And now it’s the turn for the retro fans that didn’t get the chance to capture one of the limited physical versions of the game as Ultracore has finally made its way through to the digital release by ININ Games.

Ultracore presents all the tried and trusted features and elements of a platformer. Side scrolling, pin-point shooting, turret explosions, constant avoidance of enemy confrontation, including bigger badder bosses as you progress, and rewards galore.

You would not expect anything different… but can you make it to the end with your trusted hand weapons and jumping skills?

Ultracore (Switch – eShop) comes out on June 23rd in Europe and North America.

Nakana.io have announced that Infini will be released on July 3rd in Europe and North America.

As Hope drifts deeper into Infinity, Reality begins to suffer. There doesn’t seem to be any way out, and Hope is by nature doomed to carry on. Challenge your mind to help him out. Master the innovative camera manipulation mechanic to change your perspective and discover new mazes, abilities and characters such as Time, War, Fatality or Technology – who can be helpful allies or deceitful foes in this 8-hour long story-driven puzzle adventure.

Infini (Switch – eShop) comes out on July 3rd in Europe and North America.