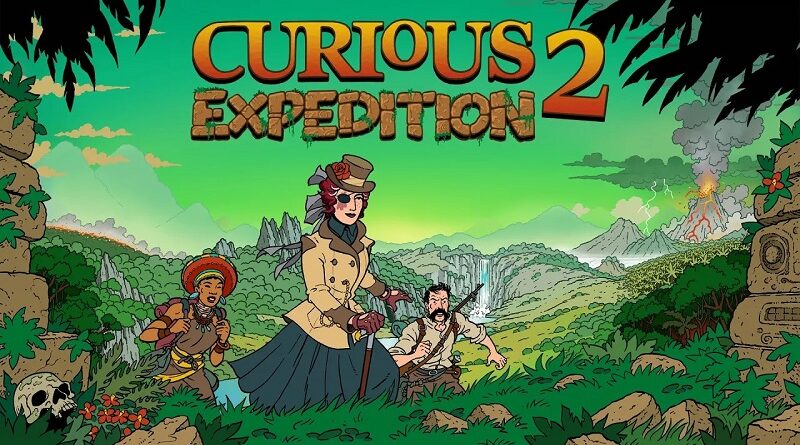 Thunderful have announced their latest game for the Nintendo Switch: Curious Expedition 2, developed by Maschinen-Mensch. It will be released later this year in Europe and North America.

In a reimagined late 19th Century, it is 1886 and the world is waiting with bated breath in the lead up to Paris World’s Fair. During this time, an immense discovery has been made: mysterious islands in the oceans have begun to appear, only to vanish soon afterwards, as if by magic. The three great Explorer Clubs of Paris are now funding expeditions to these strange islands in a bid to make bold new discoveries, to be exhibited in their stands at the upcoming World’s Fair. Take on the role of an intrepid explorer, assemble your crew, and come across all manner of unique cultures, flora, fauna, treasures and more. With a timeless art style inspired by the classic Franco-Belgian comics of the 20th century and an arrestingly charming orchestrated soundtrack, Curious Expedition 2 is a pulp adventure storybook come to life.

Using a combination of hand-crafted and procedural gameplay and story elements, Curious Expedition 2 creates completely unique and epic adventures every time you play. It tells its story through traditional choice-based adventure mechanics, but also adds in resource management, turn-based exploration and combat sections with dice-roll mechanics, and roguelike elements. It’s a curious mix of genres and subgenres, all wrapped up in a streamlined and accessible gameplay experience with powerfully dynamic options

Using a combination of hand-crafted and procedural gameplay and story elements, Curious Expedition 2 creates completely unique and epic adventures every time you play. It tells its story through traditional choice-based adventure mechanics, but also adds in resource management, turn-based exploration and combat sections with dice-roll mechanics, and roguelike elements. It’s a curious mix of genres and subgenres, all wrapped up in a streamlined and accessible gameplay experience with powerfully dynamic options

Curious Expedition 2 (Switch – eShop) comes out in 2021 in Europe and North America.

Here’s the third and final Dev Diary video for Sword of the Necromancer, focusing on the Story:

Sword of the Necromancer is a dungeon-crawler action-RPG with roguelike elements where you can revive your defeated enemies to make them fight alongside you. Turn your foes into allies using the forbidden powers of the Sword of the Necromancer and help the rogue Tama reach the dungeon’s depths to summon enough power to bring her beloved priestess Koko back from the dead. Assemble a small army of monsters, equip yourself with weapons and relics, and level up to take on the guardians that stand between you and your goal.

Each attempt gets you closer to the Necromancer. Upon death you’ll lose all your equipped weapons and monsters, but you will retain part of the level you achieved in your run. As you scour deeper through the dungeon you’ll uncover more of Tama and Koko’s past. Don’t want to go it alone? Then use the Flask of Homunculus to create a copy of yourself and play with a friend in local co-op! Additionally, there are IR codes that can be scanned to make the game easier. Or harder. The choice is yours!

Sword of the Necromancer (Switch – eShop) comes out on January 28th in Europe and North America.

Odysseus Kosmos and His Robot Quest

Odysseus Kosmos and his Robot Quest invites players to look at the life of a board engineer Odysseus who is stuck at the scientific vessel while his team is somewhere on a mystery expedition. With the help of his only one companion robot Quest he is trying to maintain the ship, but everything goes wrong. The ship’s machinery has suddenly started acting up, it seems there are ghosts wandering about, and even the coffee has gone bad!

Solving puzzles and finding clues will help players to unravel mysteries that surround those two and even crack the secrets of their past.

Odysseus Kosmos and His Robot Quest (Switch – eShop) comes out on February 4th in Europe and North America.

Turtle Cream have announced that Bouncing Hero will also be released on January 21st in Europe and North America (just like Japan). It’s now available for digital pre-purchase.