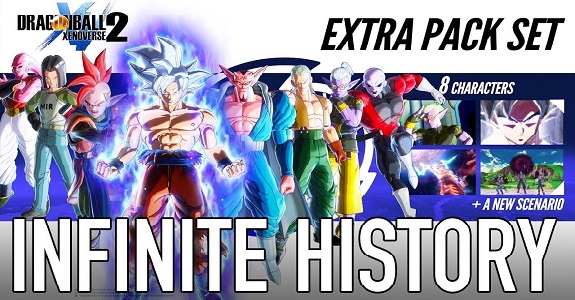 Next week, Dragon Ball Xenoverse 2 is getting another DLC Pack: the Extra Pack 2, that will be released on February 28th. This one contains some pretty exciting content (especially for those of you watching the Dragon Ball Super anime series), with new characters, a new scenario, new costumes, and more.

First, here’s the 4 new characters included in this DLC Pack:

About the new scenario, called Infinite History, Fu is its central character. You have to decide if you help him by changing the past or not, and the choice you make will lead to a different outcome. There’s various routes for you to complete, and they’re all recorded in the Tokipedia feature. This new scenario also features CG animated cutscenes, that change depending on the character you choose to undertake the mission with.

But that’s not all! The Extra Pack 2 also includes the following:

Here’s the trailer for the DLC Pack:

The Extra Pack 2 for Dragon Ball Xenoverse 2 comes out on February 28th, worldwide. The Upcoming Games page has been updated!