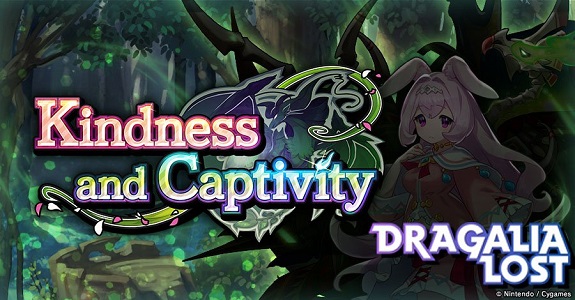 Now that the Halloween event (Trick or Treasure!) is over, it’s already time for the next one! Today, it was announced that the next event would be another Raid Event, called Kindness and Captivity. It will take place from October 31st to November 12th, with the period for redeeming rewards running until November 19th.

Prince! You’ve gotta do something! My friend Melsa needs our help! Her village was raided by those Empire jerks, and the dragon that protects them was captured! Melsa doesn’t deserve this! We have to help her!

Since this is a Raid Event, players will be able to team up in order to take down a giant boss. To be more precise, 4 players can team up, each bringing 4 adventurers each… that’s 16 adventurers at once! The Raid Boss for this event is called Hypnos (which is a wind-type boss).

This event will allow you to earn a 5 ★ Dragon, called Sylvia. There’s two ways to get it: via Blazon Summons, or as a event reward (using emblems earned by clearing quests, and taking down the Boss and Raid Boss).

Just like the previous Raid Event, you can also befriend a character: Melsa. She appears in the story of the event, and if you earn enough points by clearing quests and taking down the Boss and Raid Boss, she will become your ally permanently!

Some skills are not landing on the Raid Boss. The developers are currently working on a fix that will see the following skills adjusted so that they will land on enemies located higher than the characters using them:

As an apology for the issue, all players who started the game before October 31st can get the following as Special Log-in Bonus: wyrmite x300 (available until November 7th)

During the Storm Sentinel Clash event boss battle, the game can hang if Storm Sentinel uses Orbital Drones. This issue occurs across all difficulty levels, unfortunately. You can fix this by restarting the game.

The developers are currently investigating this issue, and more details will be provided at a later date.

If you tap the Trick or Treasure event banner on the Home Screen when Melsa’s friendship has not been maxed out, you will get an erroneous prompt asking you to remove her from your team.

The developers are currently investigating this issue, and more details will be provided at a later date.

An issue is currently impacting “Hypno’s Bane”, the ability of the Better Together wyrmprint. Quite simply, it does not work at all against Hypno’s right claw in the Hypnos Showdown (no matter which difficulty level you’re playing on).

Update: the latest Data Update for this game fixes this issue.

Dragalia Lost: Kindness and Captivity – How to play and Rewards/Summon details

Here’s details about the event:

Guided by the sylvan Melsa, the prince and his companions head for the forest village that was raided by the Empire. If only they knew that a fearsome fiend and a vile trap await…

This event features a special character: Melsa. She’s only available during the event, but by clearing quests and defeating the Boss and Raid Boss, you can increase your friendship level with her. Once it’s maxed out, you will be able to keep using her as an ally event after the event is over (she even comes with her own Adventurer Story)! Naturally, her level, stats, equipment, and position on your party will be maintained if you do unlock her. If you don’t, do keep in mind that any item used to upgrade her level or her Mana Circle, or to promote her, will not be returned.

By beating bosses, you earn otherworld fragments: you can then use those to challenge the mighty Hypnos with your friend during a Raid Battle. During those, all 4 players bring 4 characters each, for a total of 16 characters in battle. There’s 3 difficulty levels: Beginner, Standard, and Expert.  If you’re hosting a room for a raid battle, you will need otherworld fragments and stamina. If you join someone’s room, you only need Getherwings.

There’s also the Blazon Summon: it requires peregrine blazons (obtained by clearing quests, boss battles and raid battles), and it allows you to earn big rewards, including an exclusive Wyrmprint and Dragon! If you use the exclusive Wyrmprint on the raid boss, you can boost your damage! You can get a resettable dragon as reward: if you do, you can reset the summon content up to 5 times (after that, you have to accept the rewards).

Here’s the list of Emblems rewards (Bronze, Silver, and Gold):

And here’s the contents of the first Blazing Summon: