Here’s the latest trailer for Indivisible:

The latest issue of Jump magazine (releasing on Monday) will reveal that My Hero One’s Justice is getting a “sequel”, logically called My Hero One’s Justice 2. It will retain the battle system of the original, but will feature a lot more playable characters, including some appearing in the 4th season of the anime series. Kai Chisaki is one of the characters revealed, as seen in the scan below. 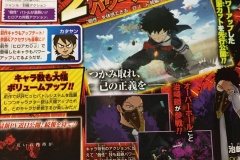 My Hero One’s Justice 2 (Switch) does not have a release date yet. The Upcoming Games page has been updated!

Circle Ent. have shared some details about Rabi-Ribi (along with the list of key features), and confirmed that the 10% pre-purchase discount is also available in Europe and North America:

This 2D sidescrolling exploration platformer follows the adventure of Erina, whose humdrum life as a regular rabbit is turned upside-down when she finds herself in an unknown world and turned into a human (with rabbit ears)! Along the way she meets the cheerful pink-haired fairy, Ribbon, who mysteriously chooses to stay by Erina’s side.

These unwitting heroes embark together on their quest to restore Erina’s life to normalcy, but who knows what troubles lurk, waiting for them…
Rabi-Ribi is a 2D exploration platformer that focuses on non-linear gameplay. There will be hints to guide the player along, but they’re never required to follow them, which allows for much greater freedom to — you guessed it — explore.

Players will play as our protagonist Erina, who focuses on close quarters combat. Ribbon the fairy is the ranged attacker who follows Erina’s lead, indirectly controlled by the player. Erina may be a little rabbit that was turned into a human, but that doesn’t stop her from being capable of some pretty neat moves. Both Erina and Ribbon’s abilities can be improved by learning new skills and attacks through collecting items and upgrades that are spread throughout the world.

Heads up for players interested in Dusk Diver: the game is now available for pre-purchase on the Nintendo eShop in Europe!

Dusk Diver (Switch) comes out on October 24th in Japan, October 25th in Europe, and October 29th in Europe.

Lion Castle have announced that Super Street: Racer will be released on November 8th in Europe, and November 12th in North America. Here’s some more details about the game:

In Super Street: Racer, you don’t just buy your car, you build it. Use hundreds of car parts from the biggest aftermarket brands to customize your exterior, interior and performance to go from scrap to supercar! Take your build to the streets and tear up the roads in breathtaking landscapes or world cities. From drifting on the highways in Tokyo and burning rubber in the Nevada desert, to cruising the warm, atmospheric streets of Los Angeles.

Super Street: Racer (Switch) comes out on November 8th in Europe, November 12th in North America, and November 14th in Japan. The Upcoming Games page has been updated!

Here’s the latest videos for Contra: Rogue Corps (now available in Europe and Japan), with: