Here’s the latest trailer for Darksiders Genesis, focusing on abilities and creature cores:

In Darksiders Genesis, both Horsemen begin with a variety of different attacks but will gain access to more devastating and fascinating ways to smash demons on their journey through hell. “Creature Cores” can be picked up afters slaying enemies and bosses and are also available for purchase at Vulgrim’s store in exchange for souls. The “Creature Core”-system allows the player to shift the balance between the different playstyles of War and Strife. Would you like to increase your attack power or add a lava trail to your dashes? Would you like a chance to spawn a hellhound whenever you attack or do you want to increase the amount of health & ammunition your enemies will drop?

Behaviour Interactive have announced that the next expansion for Dead by Daylight, Cursed Legacy, will be released in December worldwide. It will include the following:

Here’s the trailer for the expansion:

All in! Games have announced that Tools Up! will be released on December 3rd in Europe and North America.

Here’s the latest trailer for the game, along with some details:

Have fun together! Tools Up! is a great party co-op game for all ages. Laugh and shout with your family and friends while testing your teamwork skills. Simple controls, straightforward tasks and a Party Mode will make it the best renovation experience of your life.

Tools Up! (Switch – eShop) comes out on December 3rd in Europe and North America. The Upcoming Games page has been updated!

Forever Entertainment have announced their latest game for the Nintendo Switch: Roll’d, which is releasing soon. 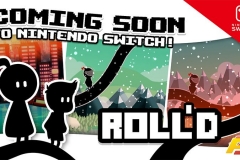 Beat the stylized infinite tracks and unlock the variety of runners – you’re fine as long as you remember the twist: you don’t control your character, you control… The track!

Roll’d (Switch – eShop) does not have a release date yet. The Upcoming Games page has been updated!

Here’s the launch trailer for Zumba Burn it Up!, now available in North America:

Zumba Burn it Up! (Switch) comes out on November 22nd in Europe.

Golem Entertainment have confirmed that they are bringing Real Heroes: Firefighter (originally released on Wii) to the Nintendo Switch on November 27th. It’s now available for pre-purchase on the Nintendo eShop, with a special pre-purchase discount.

Put on a fresh pair of turnout pants and grab your Fire Axe. Previously released and nominated for ‘Best First Person Shooter Award’ by IGN on Nintendo Wii, Real Heroes: Firefighter sees players take on the heroic role of a rookie firefighter destined to become a hero. The game has been fully optimised for the Nintendo Switch and features a unique cel shaded look.

With a star-studded voice cast, including Aliens’ Janette Goldstein, Buffy’s James Marsters and more, you are a newly graduated cadet starting out at a big city fire station in Los Angeles, the “powder keg” of the world. Learn the tools of the trade and battle massive fires and rescue survivors, living the life of one of the world’s last true heroes – a real firefighter!