For more details about the game, or simply the Kickstarter campaign itself, click here to check out the Kickstarter page! If all goes well, R-Type Final 2 could be released in December 2020.

Did you enjoy the music in SteamWorld Quest: Hand of Gilgamech? If yes, here’s some good news for you: it’s now available for streaming and purchase on BandCamp! The album costs $10 (though you’re free to pay it more if you want to support the composers!), and includes all 34 tracks from the game + 2 bonus tracks. The music was composed by Pelle Cahndlerby, Oscar Rydelius, and Erik Gudmundson.

If you prefer iTunes and/or Apple Music, no problem: it’s coming to both platforms in the near future! 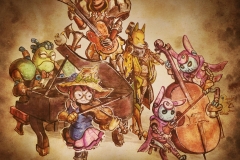 Catness Game Studios have announced that The Savior’s Gang will be released on June 4th in North America (no word on European release yet). It will cost $4.99!

Here’s the recording of the latest livestream from Dengeki, this time featuring PixARK: