Click here to check out more details about this character!

QubicGames have announced that Barbarous: Tavern of Emyr will be released on December 25th in Europe and North America. It’s now available for pre-purchase on the Nintendo eShop.

In this game, you will be tasked with preparing various treats and delivering them to the customers. Grab items and combine ingredients in compounds. But be warned. Customers have limited patience, and they won’t wait forever for you to respond. Manage your time well, or you’ll lose clients. Each action is rewarded. Get the points for checking out guests, and earn diamonds as a reward.

You play as Emyr realm’s – probably – most famous hero. That is, until his career was destroyed by a dreadful wound. And that right before he had a chance to kill his Archenemy; whom, as 100% credible prophecy has said: “No hero can defeat”.

If that’s not enough, one day he wakes up only to find out that he spent all his money on a shabby tavern. Life as an innkeeper? That’s no role for a leading hero, right? That’s a commoner’s job! And to make things even worse, suddenly some teenager claims to be his daughter. Will Emyr be able to get his adventuring career back on track? Will he defeat his dreadful foe? And finally, can he answer the challenges of responsible parenthood? As they say, old habits die hard. 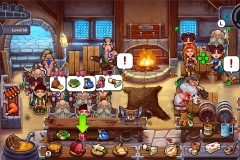 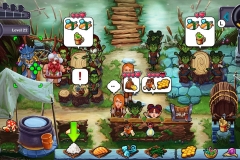 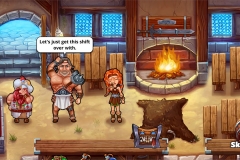 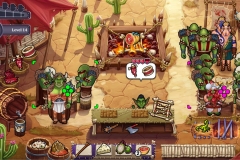 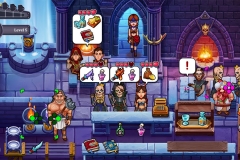 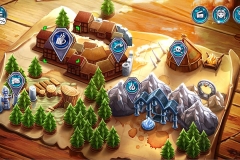 Barbarous: Tavern of Emyr (Switch – eShop) comes out on December 25th in Europe and North America.

Yo-kai Watch 4++ (Switch) comes out on December 5th in Japan.

Here’s a Commercial for One Piece: Pirate Warriors 4:

Bandai-Namco have announced that the latest DLC character for Dragon Ball FighterZ, Broly (Dragon Ball Super), will be released on December 5th worldwide (as part of the FighterZ Pass 2).

Here’s the latest trailer for this character:

ZeNfA Production have announced that Drop It: Block Paradise (on Wii U!) finally has a release date: December 25th in North America, where it will cost $1.99.

Get ready for Drop It: Block Paradise, a physics-puzzle game where your goal is to guide stars from their lofty heights to safe ground by touching the colorful blocks they stand on. You won’t have to go it alone – helpful siblings Tip and Tap are always on hand to give you some tutorial tips on where to tap. The better your results on each stage, the more stars you can earn to unlock concept art, stamps, and funky beats to jam out to! 150 awesome fun levels in all await you.

Drop It: Block Paradise (Wii U – eShop) comes out on December 25th in North America. The Upcoming Games page has been updated!