Today’s Daily news: Road to Guangdong now available for pre-purchase on the Nintendo eShop, but also…

Excalibur have announced that Road to Guangdong is now available for pre-purchase on the Nintendo eShop in Europe and North America.

Follow the story of a young graduate, Sunny, who has inherited the treasured family restaurant. Set against the stunning backdrop of 1990’s China, follow Sunny on the road-trip of a lifetime through picturesque lands, gathering secret family recipes that hold the key to your restaurant’s future success. 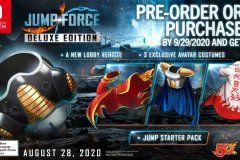 Road to Guangdong (Switch) comes out on August 28th in Europe and North America.

Bandai-Namco have confirmed the pre-purchase and early purchase bonuses for Jump Force Deluxe Edition in Europe and North America (available until September 29th):

Here’s the Accolades Trailer for Rock of Ages 3: Make & Break: