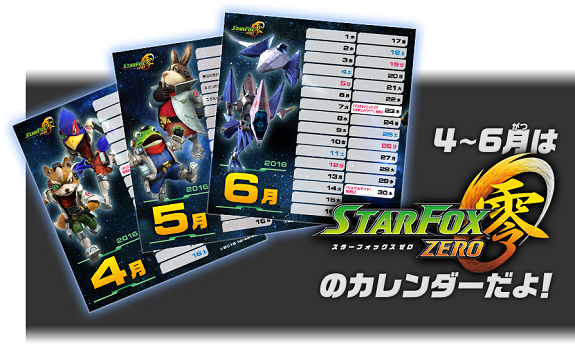 In Japan, Nintendo regularly updates the Nintendo Kids Space with some new contents for kids (and their parents). Today, they added something that will appeal not just to kids, but also to Star Fox fans: a Star Fox Zero calendar. It features artworks of the main characters and the Arwing + Walker, and is obviously in Japanese… not that it matters much: it’s just a calendar after all!

Here’s some pictures of the calendar, which covers April, May, and June (click here to download it as a .pdf file):

Here’s two more screenshots for Bokujou Monogatari 3tsu no Sato no Taisetsuna Tomodachi (the latest entry in the Story of Seasons series). They show Shalq and Alma, the son and daughter of Zaha and Calila, who love pranks.

Bokujou Monogatari 3tsu no Sato no Taisetsuna Tomodachi (the latest entry in the Story of Seasons series) comes out on June 23rd in Japan.

Here’s some preview pages for the Hyrule Warriors Legends – Prima Guide, which includes:

Hyrule Warriors Legends (3DS) comes out tomorrow in Europe, and on Friday in North America.

Circle Ent. just announced that Conveni Dream (a simulation game in which you run a convenience store) passed lotcheck at Nintendo. We should get a release date pretty soon!

Today, another event went live for Lost Reavers in Japan, and last April 6th. All players have to beat some specific bosses as many times as possible, and at the end of the event, they will receive various rewards depending on how many times the bosses were defeated by everyone. Some of the rewards include costumes for Sayuri and Victoria.

Lost Reavers (Wii U eShop) comes out April 28th in Europe and North America, with a beta starting on April 14th.

From March 30th to April 18th, the following games will be on sale on the Nintendo eShop of the Nintendo 3DS in Japan:

And here’s some goodies already available or coming soon to Japan:

Monster Hunter Generations (3DS) comes out this Summer in Europe and North America.

Here’s the launch trailer for Elliot Quest, which came out today in Japan:

Here’s the latest card from the 4th series of Fire Emblem cards (which launched last week in Japan):