We just added the official video for the mosaic, uploaded earlier by The Pokémon Company! 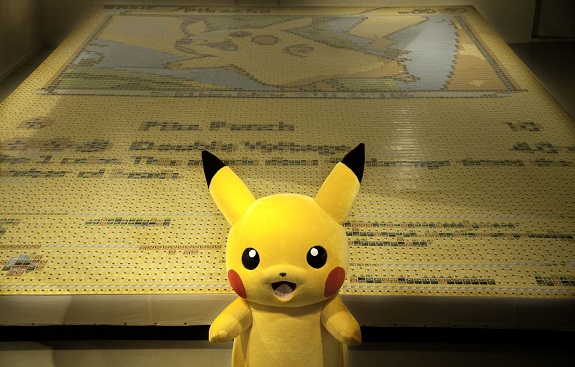 This year, the Pokémon series is celebrating its 20th Anniversary. To celebrate, The Pokémon Company has several events in stores: games, Pokémon disitributions, goodies… and even a world record! The record is for a mosaic, made with no less than 12 897 Pokémon trading cards, which shows a giant Pikachu TCG card. It uses the original iconic pose drawn by the one and only Ken Sugimori.

The mosaic was made by Quentin Devine, an artist, animator and designer from Surrey, England (who previously created a giant mosaic of the Mona Lisa from fan self-portraits, and an image of the Queen of Great Britain using penny coins). It measures 71.54 square metres, and hangs at over 10 metres tall and 7 metres wide. It was unveiled this morning in Paris.

Here’s some pictures of the mosaic:

And here’s a video of the mosaic being built, and then transported all the way to Paris where it was unveiled, on Monday: