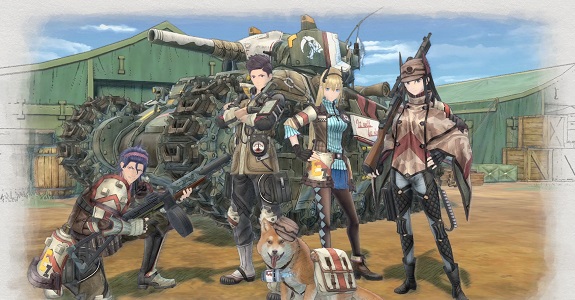 Here’s the latest set of screenshots and artworks for Valkyria Chronicles 4:

Valkyria Chronicles 4 (Switch) comes out this Summer in Japan, and later this year in Europe and North America.

Here’s some more screenshots in English for Dragon Quest Builders:

Kawaii Pet to Kurasou Wannyan & Idol Animal (3DS) comes out on April 5th in Japan. It’s been added to the Upcoming Games page!

Here’s some pictures for the latest set of DLC for Nobunaga’s Ambition: Taishi in Japan:

Today, Capcom announced that service for Monster Hunter Frontier Z would be discontinued on August 1st. After that date, it will no longer be able to play on Wii U, though player can transfer their data and keep playing on PC. More details can be found in Japanese on this page!

Here’s some pictures for the Capcom Café x Okami collaboration… or rather the goodies sold there:

In the game, which picks up where Hotel Transylvania 3 leaves off, Drac’s Pack land themselves into hot water yet again — washed overboard and lost on mysterious islands. Players will rescue their favorite monster friends from fearsome enemies, discover lovable new allies with amazing abilities, and push their puzzle-solving skills to the limit to find their friends and the magic compass needed to get back to Hotel Transylvania.

Hotel Transylvania (Switch) will be released this Summer in Europe and North America. The Upcoming Games page has been updated!

Here’s some pictures of Monster Hunter-themed handkerchief from Japan: