Earlier this week, USGamer posted a really nice interview with Kouhei Maeda (Intelligent Systems, Director), Masahiro Higuchi (Intelligent Systems, Producer), and Genki Yokota (Nintendo, Director). It tackles several topics: how they did to develop two games at once, the input of Shin Kibayashi (novelist), the characters that Kouhei Maeda and Mashiro Higuchi had their protagonist marry, and more. Click here to check it out!

Talking of Fire Emblem Fates, some badges are now available in Nintendo Badge Arcade in North America (along with two Free Plays)! 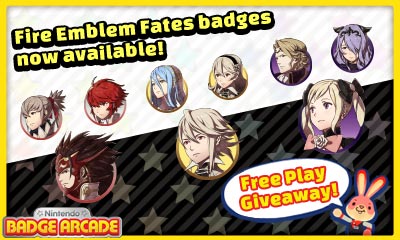 The Legend of Zelda

This year, The Legend of Zelda celebrates its 30th Anniversary, and some websites have already started putting up various articles. GameStop went and asked several (Western) developers about their memories of the series, and how much it has influenced them and the games they created. Click here to check it out!

Return to PoPoLoCrois: A Story of Seasons Fairytale

If you’re in the mood for another interview, here’s one of Yosuke Tamori, creator of the PoPoLoCrois series. He talks about how he warmed up to the idea of a PoPoLoCrois and Story of Seasons cross-over, how he finds modern RPGs have become too severe and brutal, and his hope new fans will discover the series thanks to this cross-over. Click here to check it out!

Today, the Nintendo World Store re-opened after renovation, and is now known as “Nintendo NY”. If you happen to live close to New York (or if you happen to be around), make sure to head there this week-end: you will get a free Splatoon poster!

On April 28th (just in time for the Golden Week), Hori will release a GamePad cover in Japan. It comes with a Marie & Callie cleaning cloth, and costs 1 922 Yen.

Here’s two more screenshots for Bokujou Monogatari 3tsu no Sato no Taisetsuna Tomodachi (the latest entry in the Story of Seasons series), showcasing the part-time jobs:

Wondering what’s in the Collector’s Edition of Mega Man Legacy Collection? Destructoid has some pictures:

Here’s another card from the 4th series of Fire Emblem 0 cards (launching on March 17th), Lucina:

Here’s the intro video for Toy Defense (3DS), coming out on February 25th in Europe and North America:

Also, Circle Ent. announced on Twitter that The Legend of Dark Witch and Fairune have been resubmitted to Nintendo, for the release in Germany, Australia, and New Zealand (in a about 1/1.5 month).

Here’s some screenshots for the latest Event Quests in Monster Hunter X (with one already available, and the other next week):