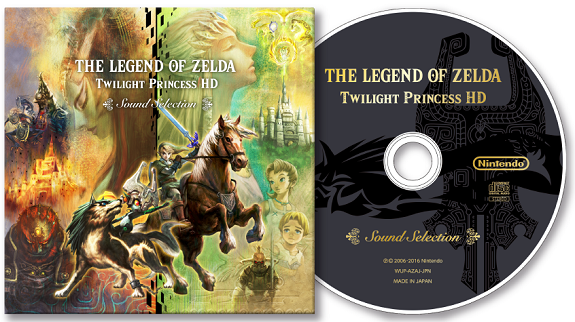 The Legend of Zelda: Twilight Princess HD comes out in exactly two weeks in Europe and North America (and 6 days later in Japan). All copies of the Limited Edition (including the Wolf Link amiibo) include a soundtrack CD (except in the United States, where the CD is a pre-order bonus at GameStop).

This soundtrack CD is called “The Legend of Zelda: Twilight Princess HD – Sound Selection”, and features a total of 20 tracks. Today, Nintendo posted a post on the “Topics” section of their official website in Japan, in order to give some details about the CD.

It turns out that the 20 tracks were actually remastered (you can clearly hear the difference thanks to the sample below, even with all the compression)! Unfortunately, we don’t know if the full soundtrack was remastered for the game, or just those 20 tracks from the Sound Selection.

Here’s the samples from The Legend of Zelda: Twilight Princess HD – Sound Selection, conveniently merged in a single video (thanks to our one-and-only D-e-f-):

The tracklist of this Sound Selection is as follows: