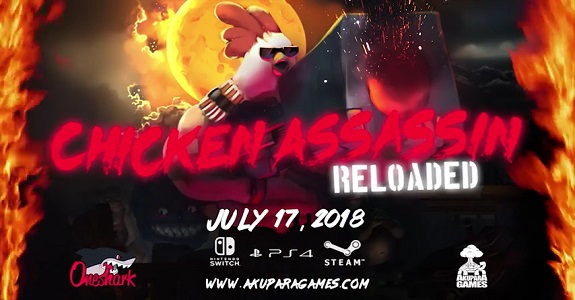 Earlier this week, OneShark and Akupara Games announced Chicken Assassin: Reloaded, a “strategic button-mashing” action-RPG for the Nintendo Switch. In this game, you have you fight through multiple hordes of enemies in order to save your girlfriend, which was kidnapped. It will be released on July 17th in Europe and North America.

Play as Mean Mcallister, the baddest chicken in town, the living embodiment of what would happen if you combined Rambo, Foghorn Leghorn, and a bottle of hot sauce together.  Spritzel and his evil henchmen have kidnapped your beloved Candy, and you must punch, shoot, and slice your way to Candy’s heart in this outrageous story with over-the-top humor that boasts a myriad of colorful enemies and visually stunning levels and environments.

Warm up your clicking fingers and prepare to give your hand an intense workout as you battle a slew of eclectic adversaries, and encounter special bosses in this frenetic, action packed game! As you progress, you can upgrade Mean with various fighting styles and skills, access an arsenal of weapons to dole out punishment, and customize clothing that boosts your stat attributes.

Chicken Assassin: Reloaded (Switch – eShop) comes out on July 17th in Europe and North America. The Upcoming Games page has been updated!